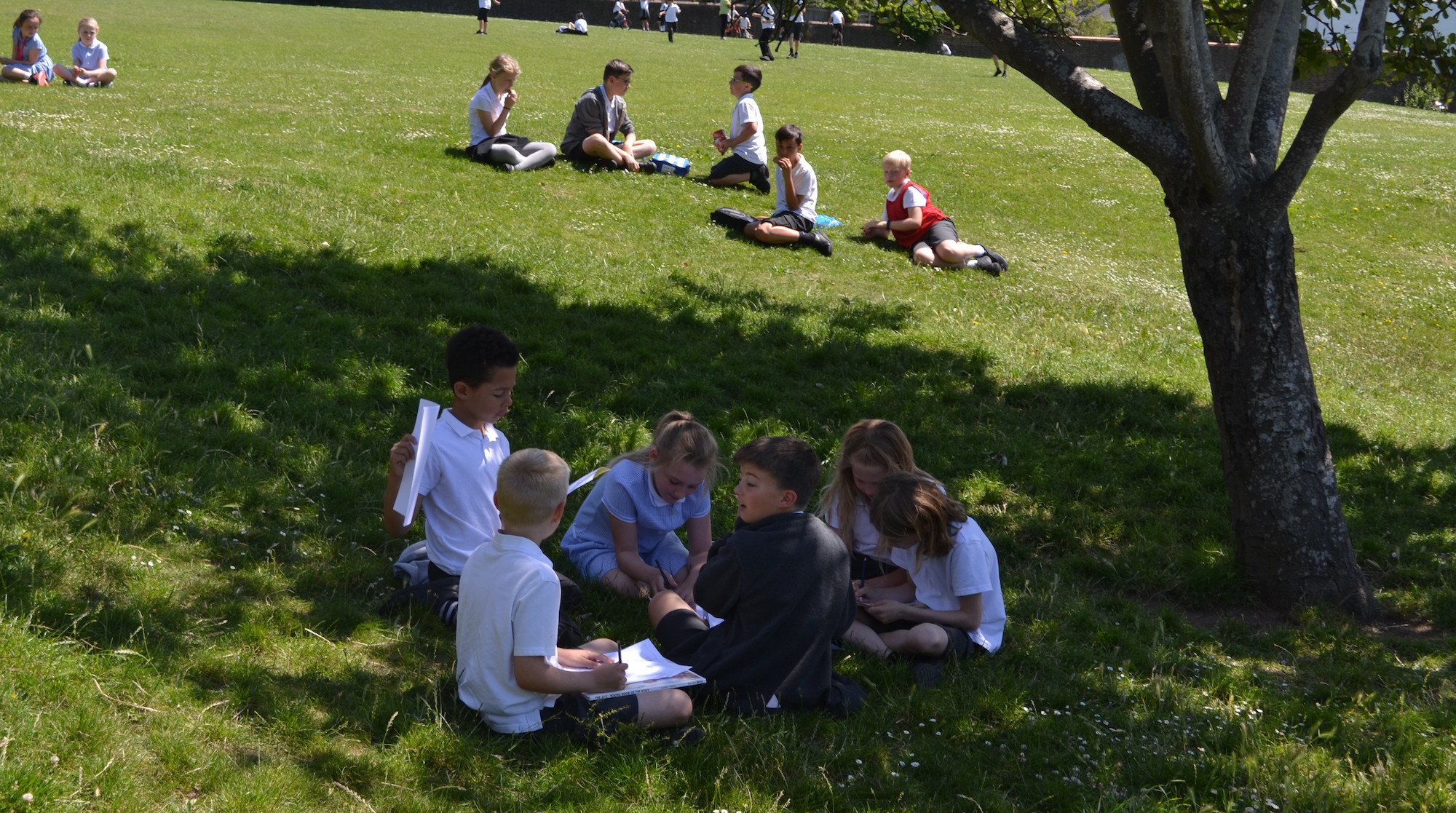 Our bus was originally in service with the Brighton & Hove Bus Company but caught fire on the Old Steine in Brighton due to an electrical fault and was damaged beyond repair. We asked whether we could have it for our playground!
Mr Ruff helped out at the garage to get the bus ready to be transported.

The news of the fire was covered by ITV, the BBC, Brighton & Hove News and The Argus.

Preparing The Playground
We had to dismantle and move the sandpit which was exactly where we wanted to put the bus.

The Delivery of the Bus

It took two vehicles to deliver the bus. A huge tow truck with lifting gear was required to get it here in the first place but also to lift one end of the bus to prevent it from grounding when going up slope at the car park entrance.
The second vehicle had a winch which was needed to pull the bus up the slope and then into place on the playground.

A Lot Of Work To Be Done!

It was clear that there was going to be a lot to do before we could use the bus!

The first job was to cut out some of the destroyed engine compartment and box it in to make the bus weatherproof. In addition, this made the ground floor of the bus slightly bigger than it would have been when in service.

Because of the fire, the bus absolutely stank! It needed jet washing and scrubbing multiple times before the smell of burning was removed. A group of parents (and some children) gave up their Saturday morning to help us do this. They also rubbed down the outside ready for painting, assembled the planer for outside and filled some of the remaining holes.

Mr Ruff and Mr Richbell decided which seats we wanted, how to arrange them and then fixed them in place.

The ceiling has been painted like a sky complete with clouds, seagulls and a jet plane. The art work was done by Sarah-Louise Bishop, an artist who is a former pupil and did the work over many hours in her spare time. She also did the artwork on the outside of the bus.

Easter 2017 - Painting the outside of the bus

So many people have helped us with this project and we want to say a HUGE THANK YOU to all of them. Here are some of the people who have helped us out:
The Brighton & Hove Bus Company who donated the bus in the first place and who have kept an interest in the project as it has progressed. They donated the green paint and have found us the odds and ends we needed as we were fixing the bus up when we have asked for them. They paid for the sign on the side of the bus, installed the bus stop, got their crafts people to recover all of the seats and gave us the brilliant drivers seat! We owe them a great deal.
Sarah-Louise Bishop is a artist who attended St Nics when she was a child. She spent many hours of her own time designing and painting the designs inside and outside the bus. She also chose and put up the brick wall paper featured in the library area.
Brighton & Hove Albion Football Club (especially Steve Winterburn - Head of Grounds Maintenance.) When we were quoted £18,000 to astroturf two areas, we knew we couldn't afford it. Mrs Crayton, a member of our staff team, asked whether the pile of old astroturf at the training ground was going to be used for anything - and it turned out it wasn't! They let us have the whole lot so we not only covered the climbing area and the adventurous play area but had some left for the area around the bus. What a difference it has made!
Richard Skerritt of Skerrit Consultatnts - £1,000. Without this generous donation the willing volunteers would not have had the materials they needed to do the work.
Aviva Community Fund £1,000 which the PTA helped us secure. This money paid for the remaining materials and also the beanbags, tables and various other things for the bus.
Martin Leaney: A local electrician and friend of the school who has been working with Mr Ruff to run the electrics out to the bus. All of his time has been given free of charge.
Kew Electrical donated the materials we need to get the electrics out to the bus.

Michael Shepherd: One of our parents. As well as volunteering with lots of other parents on various Saturdays doing all sorts of things on the project, Michael gave up time when he could have been doing paid work to install the decking and fencing.

Dan Cattell: One of our parents and also a carpet fitter. Fitted the carpet on the bus and did a great job with some very difficult astro! www.randfflooring.co.uk.

Allie Huey: One of our parents who designed and made the control panel for the driver's cab. The perspex used to cover the controls was provided and cut at cost price by Brighton & Hove Plastics,

Matt Young: One of our parents. We borrowed the machinery (mini digger, dumper truck etc.) to prepare the ground for the astroturf. He also gave up many hours of his own time in the evening, over several weekends and during the summer holiday.

Mr Craik: One of our parents. His firm fits the tablet screens for MacDonalds and he persuaded them to donate some. Over the summer wifi is being added to the bus after which the tablets will be available for lessons on the bus!

Danique Marmont: One of our parents. Donated some of the vinyl material used to cover the seats.

Penfold Verrall - Donated a lorry load of sharp sand for the astroturf part of the project.

Mayberry (Tates) Garden Centre - They have helped us out with other projects, donate prizes to all of our PTA raffles and gave us a very good deal on the picnic benches.

Albion Window Cleaning who washed down the entire bus before it was painted. They cleaned the outside a further two times during the project free of charge.

Countless parents, children and staff who gave up many hours at weekends and during the holidays to do everything from jet washing and cleaning to painting, planting, digging and fixing fence posts, and dragging very heavy and incredibly sandy AstroTurf around!

St Nicolas School PTA for raising money for all the other things like picnic benches, more tools and materials, books for the library and games for the chillout zone. Thanks you to all of the parents and friends of the school who have supported the PTA by attending events and parting with your money.

Mr Ruff & his brother Nathan Enticknapp, have been the driving force on this project from the start. It was Nathan who talked to his employers at Brighton & Hove Buses and persuaded them to give us the bus in the first place. The two of them cut out the remaining metal work in the engine compartment and made the bus water tight. Nathan who covered the seats. The two of them who came up with the idea of the tree at the back of the bus - when we had only a few days until the opening and loads left to do! The two of them have worked countless evenings and Saturdays and without them we simply would not have the bus we now have.

(I am certain that I have missed people from this list! If you visit this page and you know you should be listed here please get in touch so I can correct the error!)